Golden Rule #7: Don’t Settle for Less Than Your Best Effort.

You know when you’ve given your best effort, and when you’ve just done the minimum. Maybe you think nobody else knows. Maybe they don’t. But perhaps they do.

We hear the adage “attitude is everything” so much that it’s worn a groove between our ears. But in any task that has the potential to touch someone else’s life, attitude truly is everything. I love going to a local restaurant where a busboy speed-clears an empty table. It’s not work, it’s choreography, and he is a joy to watch. His hands are a blur as he works his way around the table, clearing dishes, spraying, wiping, resetting. He adjusts the standard table items with the precision of a micrometer. Really. Zero interaction with anyone around him. He seems unaware of the eyes, the smiles, the marvel-filled headshakes and murmurs. He just does his job to the best of his ability.

Sometimes, in the exhibit projects I work on, I’m given a working party of young sailors to assist with whatever needs doing. (One of the perks of working on an active duty Navy base.) Let me tell you, there is nothing I cannot accomplish with about a dozen energetic 18 year olds who know how to put forth an effort and work as a team. I mention what needs to be done, and they figure out how to make it happen. They have great attitudes and take pride in giving their best effort. 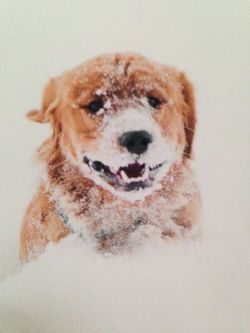 Copper traveled to Michigan with us for Christmas during his first year. He had never seen snow before in his life, and there was tons of it up there. It looked like we’d stepped out into Narnia. In most places, his feet didn’t touch the ground before the snow reached his belly, but that didn’t stop him from snow-swimming! There was no question of half-hearted effort where Copper was concerned. He adored the snow and plunged into it even though it packed in between his toes and under his belly. He took advantage of every opportunity to be out in it. He took to snow and winter weather like he was born to it — although Mississippi-bred Copper had never in his life seen much of either one.