Golden Rule #30: There Are No Dull Moments. None.

How often do you hear someone say, “That’s boring!” or, “I’m bored!” Bored, like so many other things in life, is an attitude, and an attitude is…a choice.

Some things are more interesting and exciting than other things. Folding socks, for instance, is not terribly interesting. Data entry tends to make the mind want to wander. How about being caught at the railroad tracks by a seemingly endless, slow-moving train?

Trains and tracks wind throughout Pensacola like a giant zipper. As frustrating as it might be to be caught on the wrong side of the tracks when one lumbers through, I remind myself…the railroads opened Pensacola up to the rest of the country. Before they came, Pensacola was largely accessible only by water. Our beautiful beaches really were our best-kept secret. The railroads brought people in…and took people, and products, out. Everything changed when the railroads came through.

But that doesn’t really help when you’re sitting at the track with the bars coming inexorably down. What do you do? When my daughters were young, we used to count the train cars. About the time we got close to 100 cars, the train would start picking up speed and we would see the caboose rumbling along behind alllllll those cars. It actually got to the point where we didn’t dread the trains because we knew we’d get to count the cars, and check out the colorful graffiti on the sides of some of them. Double decker cars counted twice, by the way.

Because I’m convinced that everything happens for a reason, I tend not to see any moments as “dull.” I just don’t. There’s always something to study, turn over, think about, or do. Even as a kid, I found ways to entertain myself. When I was about 10 years old, I used to sit in church, pencil in hand, paper on my lap (usually the back of one of those handy offering envelopes at the ready in the pew in front of us), and write down every word I heard that was seven letters or longer. We lived in a college town, and some of those preachers really went to town with the five-dollar words. After the service, I would give the list to my dad, who would thank me, and carefully tuck it away in his jacket pocket. What was the point? Well, there probably wasn’t one. Nobody told me to do that. Did it help my vocabulary, and affect my livelihood? Possibly. It kept me out of trouble, though, because I never knew when one of those words was going to show up.

And what has life with Copper taught me about dull moments? With Copper around, there is no such thing, ever! Copper is a very busy dog. He has always been a very busy dog, from the time he arrived on the scene. I loved that his breeder kept him and his litter mates in a pen filled with cedar shavings and played classical music to soothe their little minds and impart culture as well. I’ve learned that “calm” and “dull” are nowhere near the same words, even though they have the same number of letters. We’ve learned that twice-daily walks help settle Copper’s mind and we use the term “power chewer” when referring to his habits. Copper always has the inclination to calm others down, whether people or dogs, and he’s sensitive to tension in the atmosphere. Sometimes we have to help him calm down, too, when he’s too excited. But dull? Nope. Not a single second of dull with this bright boy around! 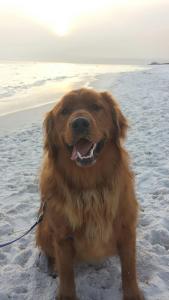